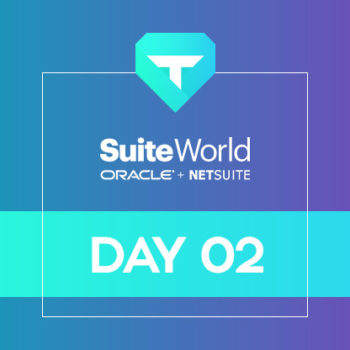 Day 2 of SuiteWorld 2017 is underway and we can feel the pulse! The day kicked off with an invigorating Executive Keynote led by Jim McGeever, Executive Vice President of Oracle+NetSuite, with contributions from Mark Hurd, CEO of Oracle.

The first Executive Keynote of this year’s SuiteWorld set a vitalizing and affirming tone for the conference taking place in Las Vegas, NV. If you didn’t know you were in Vegas before this presentation, there was no question by the end. Complete with high-stake pyrotechnics and ambitious promises from Oracle and NetSuite executives the presentation left the whole room and, especially us at Techfino, feeling confident approaching this next year.

The Elephant in the Room

Jim McGeever stepped out on stage to get things started for SuiteWorld 2017 with a brief introduction to the conference theme, “Next Starts Now,” but it was the “Elephant in the Room” that stampeded quickly to the forefront of the presentation.

As a NetSuite partner, we are hyperaware of the role we will play after the acquisition of NetSuite and Oracle. While tensions were left high after the 2016 delay, Mr. McGeever stood firm that NetSuite customers, partners, and employees have no need to worry. Before calling Oracle CEO, Mark Hurd, to the stage to fully flesh things out, Mr. McGeever emphasized that all sales, customer support, and partner services will remain the same, but as a part of a global business unit that will have access to the means and expertise of Oracle. What this means for us is more opportunity to fulfill NetSuite customers’ needs with our own services and research and development (R&D) for the software. 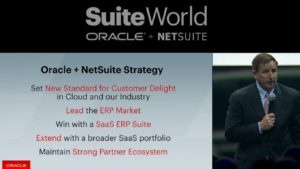 Hearing from Mark Hurd was essential for those attending SuiteWorld. Mr. Hurd rallied the crowd to stand behind him as he unpacked the importance of Oracle’s $9.3 billion acquisition of NetSuite. “We want to lead the ERP market and win with a SaaS ERP Suite,” he said. “We spent the money on NetSuite to invest and drive it harder, drive it faster!” Mr. Hurd continued in this vein to discuss the importance of R&D and his commitment to it, as well as his promise for continuity to current users and a highly-differentiated customer support experience. In closing, Mr. Hurd left everyone wanting more after expressing, “We don’t do acquisitions lightly.”

While Mr. Hurd’s presentation tackled primary concerns of the audience, Mr. McGeever jumped back in to share, in reality, what the plan for dominance is, how it is going to be set into motion, and what it all means for NetSuite and its partners. 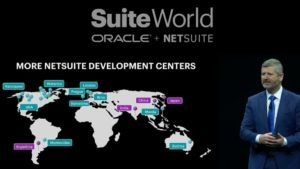 Jim McGeever, Executive VP of Oracle+NetSuite, depicting the ability to leverage Oracle's existing Global Data Centers and Development Centers. It is clear that while Oracle+NetSuite has a major agenda, Netsuite isn’t going anywhere, rather it is going to see significant growth—this is awesome for us at Techfino, since we specialize in bringing you the best of NetSuite’s capabilities and thrive off the ability to customize it. Mr. McGeever highlighted that half of NetSuite users are on OneWorld, which for the immediate future means continued expansion into 13 new countries leveraging Oracle Development Centers. This launch supports the truth of NetSuite’s core as a software built to grow with your company. There will be “no bright red line” at which point a company needs to swap NetSuite for Oracle. The Cloud won, as Mr. McGeever put it, and so has NetSuite and its partners like us!

With the excitement of all the specifics regarding Oracle+NetSuite’s planned growth and with a new foundation in place, the tone of the room turned a bit more serious to address an obvious problem. The platform change from On Premise software to the Cloud has produced, as Mr. McGeever described, a “hairball.”

The rush to the Cloud has seen the same issues as before: there are still relatively high maintenance costs; it made integrations easier, but not easy; and there are still multiple systems trying to communicate creating a “he-said-she-said situation.” These issues are a burden to the customer who, traditionally, ends up maintaining the integrations and workflows. NetSuite’s business solution to the hairball—to the unnecessary burden on the customer—is the Built For NetSuite (BFN) set of standards. In Mr. McGeever’s own words:

“Built For NetSuite was our version of a set of standards where not only do we manage the workflows and the integrations, and we manage those conflicts, but we have partners integrate with each other and we put them all in single NetSuite accounts and we test them. We took on the burden of that, so that we can do it and you don’t have to. We are now including Built for NetSuite as part of what we see as the core strategy of our wheel.” 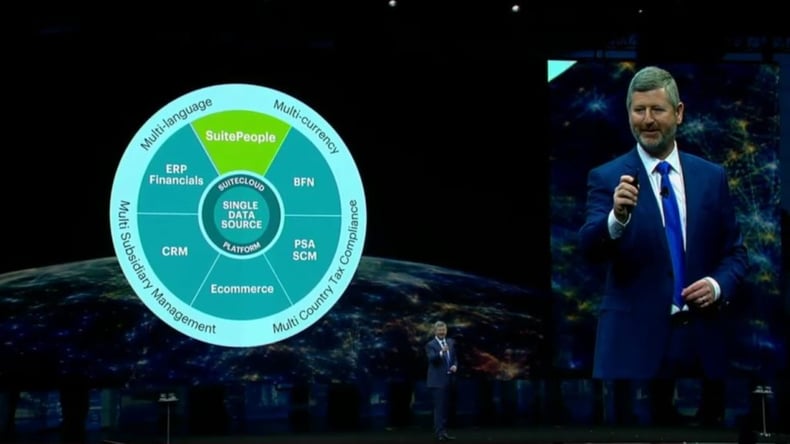 Jim McGeever on stage during Day 2's Executive Keynote with the SuiteCloud Wheel and video of himself projected in the background.

We are no strangers to the Built For NetSuite standards and our SuiteApps, CleanSweep File Manager and CleanSweep Archive, are both BFN certified. The BFN standard eliminates the risk of fragmented data, siloed processes, multiple user interfaces and broken transactions. Be sure to check out CS File Manager and CS Archive in the SuiteApp store and stop by booth #922 at the conference for live demos! 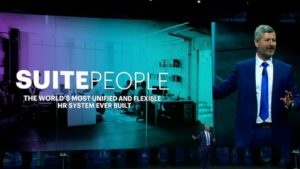 Something new to us all, though, was the announcement of SuitePeople, “The world’s most unified and flexible Human Resources system ever built.” Mr. McGeever only provided a quick teaser, but we did learn you cannot buy SuitePeople without buying the rest of NetSuite, further emphasizing unification of the system. SuitePeople will be available June 1st and we were promised more information later throughout SuiteWorld.

The Official Introduction of SuiteSuccess

What is Next for NetSuite as it is concerned with the existing software? Yes, we will be seeing the launch of SuitePeople and that is awesome. Yes, the Built For NetSuite initiative and standards are important. But, what about for existing customers? Or for those who aren't quite sold on the success of NetSuite as the leading Cloud-based software? 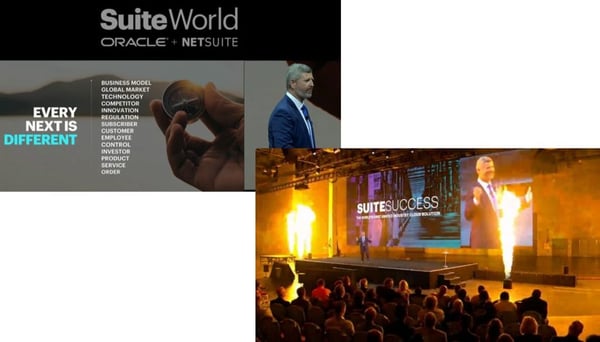 SuiteSuccess was born out of NetSuite’s drive to dominate and go after a specific vertical. NetSuite went after the retail vertical, analyzing everything from sales, services and development to figure out what was holding retailers back and how they could better serve them than any other business solution. The answer from all sides was that it was taking too long to reach go-live.

SuiteSuccess is a packaging of NetSuite tailored specifically to the vertical in which you conduct business. NetSuite has developed what Mr. McGeever introduced as the “Stairway to Heaven” for every vertical. It is the “biggest change management in NetSuite” and allows NetSuite to support and grow with you. “What we implement is what we sell,” said Mr. McGeever, referring to their practice of providing a demo account to their sales team that is identical to the implementation account handed over to a client. 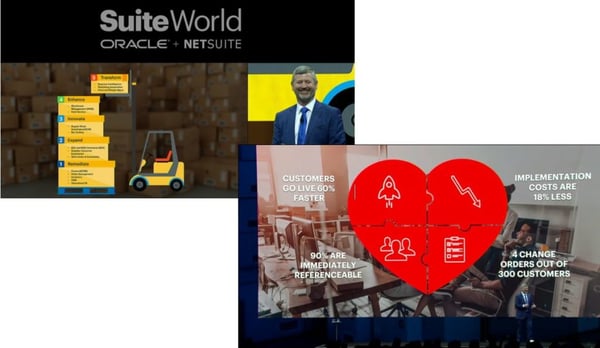 SuiteSuccess is a huge step forward for companies considering an overhaul of their ERP systems and we know this first-hand as a SuiteSuccess enabled Partner. With SuiteSuccess, NetSuite and Techfino guarantee to get your business on the Cloud in 100 days.

To speak with us about our Built For NetSuite SuiteApps, how SuiteSuccess could transform your business, or to discuss our other service offerings—leave a comment below!